Yes, yes, everyone wonders- how the hell do you do it?  Are you crazy?  I’ve got plenty of friends who love it and there are others who think it’s ludicrous.  And yeah well life is ludicrous, eh?  Traveling with cats is pretty uncommon so I wanted to write down a few things to help other people who may be inspired to do the same.  I get it- it’s not for everyone.  But I love rock climbing and traveling, and after going through a divorce, I kept the cats!  Plus- this is my home.  I’ve lived in the van for a year and a half, and so having my cats with me…well.. wherever I go, I AM home.

***NOTE- Living on the road with cats adds additional stress and responsibilities.  It’s NOT for everyone.

I lucked out because my cats travel really well.  I’ve heard of cats (and dogs!) going nuts in the car.  But back in 2015 me and my ex traveled in the van for two months and the cats did really well.  So I knew last year that at least they would travel ok.   So really- if you want to do this- take some test drives with your cat(s) first.  Get them used to the vehicle.

About the cats (in case this helps you decide based on your cats personality):

Leonard is maybe 7 years old, loves adventure, is pretty friendly unless you try to pick him up for long periods of time, AND HIS SHIT DON’T STINK! Seriously, hallelujah he covers his shit.  Favorite place in the van- the windshield.  Now that he’s been going outside on a daily basis he gets ancy being in the van for too long. This makes the transition periods, moving from one long-term spot to another, a little challenging.  In Kentucky he was used to me opening the driver’s door every morning, jumping out, escorting me to the bathroom, and spending the mornings outside.  But when we are in transit to other places, you can’t exactly let them off leash at a rest stop or walmart or friend’s neighborhood.

Gus is a million years old (or 16?), has diabetes, is skinny and his SHIT STINKS.  It’s definitely the worst part of having an old cat who DOESN’T cover his shit.  You have to scoop it immediately or you might die.   I changed his food in August to Royal Canin (amazing, highly recommended) but with that change the smell got worse. I mean…I think it was bad before, but wow wow wow, it got SO BAD! So it is kind of like having a baby- if he poops at night, I have to get up and cover/scoop it. Or you will die in your sleep.  He’s a pretty chill cat, could care less to go outside, will let you pick him up.  His favorite spot is in my lap or on the bed.   Traveling with an older cat can be nice because they aren’t always trying to jump out of the van, but it’s also stressful because the older they get, the more needy they seem.

So overall, I think the most important thing is to get your cat OUTSIDE.  Listen to your gut. When in doubt, put them on a leash.

Gus doing what he does best 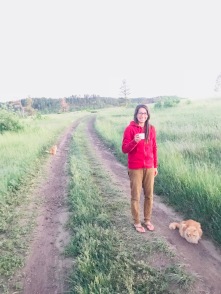 Walk with the cats

He really is a lion

Feel free to contact me if you have questions! Want to travel? Make it happen.